Not long ago, a friend of mine in Colorado texted me to tell me she’d just gotten microspikes. She said they were a gamechanger for hiking in packed snow and ice.

Fast forward to two weeks ago. I was hiking at Grayson Highlands State Park, at a much higher elevation than at home my home. Oh, there was ice and snow.

As an Amazon Associate I earn from qualifying purchases. If you click and purchase, I receive a commission at no cost to you.

I was cursing myself as I cautiously hiked along the Appalachian Trail in Virginia to Wilburn Ridge – sans microspikes – slipping on ultra-slick icy patches.

The snow hiking season has just begun and it was crystal-clear that microspikes were to be a part of my future. Thankfully, they are fairly affordable. 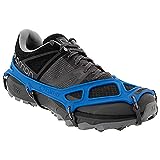 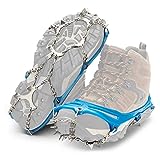 Are Microspikes Any Good?

To be honest, I’d never heard of microspikes, so I said, “You mean like Yaktrax?” I didn’t have a pair, but as a winter weather runner, I’d heard of this brand.

Essentially, microspikes provide needed traction when hiking on slippery surfaces, like snow and ice. They slip over your hiking boots or trail runners.

They reduce your chances of a spill while you are hiking or backpacking. Small, durable spikes dig into ice and snow as you hike to keep you upright.

Typically, microspikes have 12 spikes that are no more than .5 inches in length. They also come in different sizes based on the size of your hiking boots or shoes.

Microspikes cost from $20 to $60 or more, depending on the brand and level of traction. It can be an investment, but for peace of mind, they are worth the price.

A lot of people have heard of crampons. However, crampons may be more than you need. For starters, the spikes can be twice as long as those on microspikes.

Crampons generally have about 50 percent more spikes, too. As in, closer to 20 rather than 12 that are more common on microspikes.

What you really need to know is that crampons are best used for ice climbing or hiking steep, icy grades. The long spikes can really dig in to thick ice.

Microspikes, meanwhile, are for the more casual hiker on moderately icy or snowy hiking trails. They will provide much-needed traction to safely hike in the winter.

There are two primary brands when it comes to microspikes: Yaktrax and Kahtoola. However, one search on Amazon may lead you to believe otherwise.

You’ll see loads of brands, but the majority of what you see are crampons. Not microspikes. You may also see them called ice cleats, snow grips or ice spikes.

While “microspikes” is the soon-to-be generic term for these slip-on soft adventure traction devices, you may see them from Kahtoola as EXOspikes or NANOspikes.

Both of these use more lightweight tungsten carbide rather than stainless steel for the ever-important spikes that keep you stable on ice and snow.

Since my experience slip-sliding along the Appalachian Trail at Grayson Highlands State Park, I’ve spent a lot of time researching microspikes.

I should say I was researching “footwear traction” or “ice grips.” Kahtoola has owned the trademark for “microspikes” since 2008. Rather, MICROspikes.

For this reason, you won’t find a lot of brands touting their “microspikes,” so keep this in mind if you start hunting around for “snow spikes.”

Since few want to scroll through review after review, I’m going to share the three footwear traction devices that made my short list before I made my purchase.

Honestly, you can’t go wrong with an original. The Kahtoola MICROspikes do what they need to do. That’s according to more than 1,000 five-star reviews on Amazon.

I’m wary of products with so many top ratings, but when you dive into the written reviews you can tell that this is a legitimately satisfied group of winter hikers.

As for product features, the length of the 12 stainless steel spikes are .375 inches. They are tough and well-made for ice, packed snow and wintry mix conditions.

Reviewers noted that Kahtoola MICROspikes lasted longer than other brands. That’s good because no one likes to have to replace a product so soon.

Kahtoola MICROspikes are durable. Even better, they are easy to both put on and take off. They grip icy terrain like it’s no big deal. They come in black and red.

In terms of size, you want them to fit snugly, so if you are between sizes, opt for the smaller of the two. This is a unisex product for men and women.

The Kahtoola EXOspikes don’t have quite as many five-star ratings. Just eight (out of 10). But hey, they’re brand new on the scene, launching in June 2020.

These appear to be a cross between MICROspikes (for hikers) and NANOspikes (for road runners). They wow with their traction-oriented design, too.

Kahtoola EXOspikes have smaller, lighter spikes made of tungsten carbide. There are 12 spikes, but they are .29 inches (50 percent shorter than MICROspikes).

These are dual-purpose spikes, best for those who – like me – may want to use them for both winter weather hiking and road running, even trail running.

For hiking, the Kahtoola EXOspikes would be best for use on packed snow or ice, as well as on rocky, icy and muddy terrain on moderately rugged mountain trails.

These spikes come in blue and black. These are good for trail runners and hiking boots. Go go up a size if you plan to use them exclusively with boots.

Yaktrax has been helping folks like you and me get outside in winter for more than 20 years. They’ve got at least a dozen Yaktrax traction devices.

Personally, it seems a bit much to have so many styles, but they meet the needs of all different customers, including walkers, runners, hikers, climbers and skiers.

For avid hikers, look to the Yaktrax Ascent. This is a mid-range traction device that provides just the right amount of grip whether on mostly flat or steep terrain.

The Yaktrax Ascent has more and longer spikes than the Kahtoola MICROspikes. Each one has 16 stainless steel spikes that range in length from .375 to .5 inches.

These traction cleats are sturdy and aggressive. They won’t let you fall on ice or snow, no way. As a bonus, a three-point heel feature prevents snow build-up.

The Yaktrax Ascent cleats are available in blue and have stretchy bindings that make it easy to pull onto your hiking boots. They also stay in place quite nicely.

After careful consideration, I bought the Kahtoola MICROspikes. As I noted above, you can’t go wrong with the original, and I’ve been pretty happy with these.

While I liked that the Kahtoola EXOspikes could be used for both hiking and running on snow and ice, I knew I’d never use them when I run in winter.

I run so early in the morning (well before sunrise) that I’m more afraid of black ice. I don’t know that spikes could save me. I usually stay indoors on icy days.

If you decide to buy microspikes, er traction cleats, let me know which ones you decide to go with and how you like them. See you on the snowy trails this winter!

For more winter gear picks (which by the way, are some of the best hiking gifts), check out my Gear Guides.

55 Best Hiking Gifts for Every Hiker on Your List

This website uses cookies to improve your experience while you navigate through the website. Out of these, the cookies that are categorized as necessary are stored on your browser as they are essential for the working of basic functionalities of the website. We also use third-party cookies that help us analyze and understand how you use this website. These cookies will be stored in your browser only with your consent. You also have the option to opt-out of these cookies. But opting out of some of these cookies may affect your browsing experience.
Necessary Always Enabled
Necessary cookies are absolutely essential for the website to function properly. These cookies ensure basic functionalities and security features of the website, anonymously.
Functional
Functional cookies help to perform certain functionalities like sharing the content of the website on social media platforms, collect feedbacks, and other third-party features.
Performance
Performance cookies are used to understand and analyze the key performance indexes of the website which helps in delivering a better user experience for the visitors.
Analytics
Analytical cookies are used to understand how visitors interact with the website. These cookies help provide information on metrics the number of visitors, bounce rate, traffic source, etc.
Advertisement
Advertisement cookies are used to provide visitors with relevant ads and marketing campaigns. These cookies track visitors across websites and collect information to provide customized ads.
Others
Other uncategorized cookies are those that are being analyzed and have not been classified into a category as yet.
SAVE & ACCEPT